I’m not going to spend a lot of time reviewing Sean Murphy’s Punk Rock Jesus but here are a couple of thoughts.

Good imagery but difficult to follow because of the lack of colour. To depict the dark and gritty future we are left with vast swathes of black in which we have to try and pick out the detail.  In comparison, I just grabbed a copy of BPRD off my bedside cabinet and the many and varied shades of blue make for an easier read whilst keeping the gritty feel.

Simon Cowell gives up on X-factor and makes a reality show out of the Turing Shroud by cloning Jesus.  After fifteen years of staring in a morally bankrupt reality show Chris (the clone) breaks out to tell the world that “God is Dead”. Everyone dies.

My main criticism is that this is a very one dimensional story.  We see an ongoing battle between a caricature of US Christianity and a caricature of new atheism. At the end of the book, the author explains in his own words of how he was a Catholic who became an atheist and PRJ comes across as an out working of an internal angst. There isn’t so much a story on which arguments are hung but angry teenage angst with an absence of storyline.

Anyone who knows me is aware that the most important thing I look for in any story is the development of the characters and their relationship with each other.  Everything is a vehicle for the interplay of characters.  Sadly, there was little in PRJ to appeal in this department.  The villain is a pantomime villain. The ‘hero’ is a pantomime stroppy teenager. The martyr is quickly dismissed as a drunk. The most interesting character is the ex IRA bodyguard, Thomas.  We get a good glimpse into his past life, his background in the IRA and haw that influenced him to this point. Sadly this is a small glimmer of character development. In some respects, I wish this story had been fleshed out over three or four times as many issues to give a storyline that had potential some room to grow.

One aside about the theological worldview of this narrative:  For a world with no overarching deity or “guiding power”, there is a surprisingly strong sense of an “inescapable fate”. It is as though the characters are being dragged to the end kicking and screaming by an external force.

Thomas McKeal telling Chris that he was just the same as his opponents operating through “blind idealism”.

When I graduated the first time I couldn’t even tell you who spoke to us, let alone what they spoke about.  It certainly didn’t inspire me to go and live life and enjoy the journey.  Needless to say, the second time around I graduated in absentia… 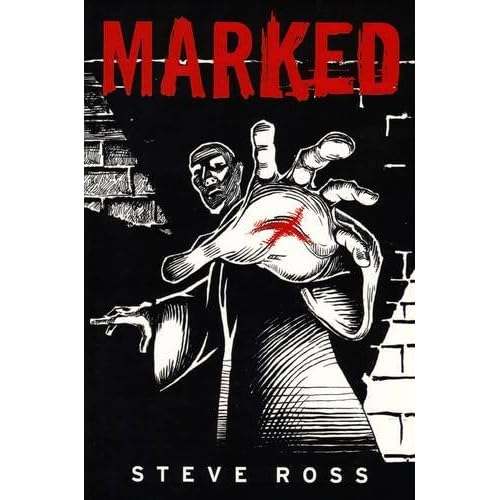 I have just finished reading Marked by Steve Ross.  I was sent it by a friend who was feeding my comic book addiction.  Here’s a quick review by Alan Grant:

Steve Ross’s graphic novel ‘Marked’; is an exceptionally impressive achievement. The New Testament’s Gospel According to Mark is re-told in comic strip using contemporary life, characters and culture. The result is startling, remarkable and completely unique: the horrors and demons of 2,000 years ago are dragged drooling and screaming into the mean streets – and meaner people – of today. Steve’s chilling message seeps out from under his bold words and images: nothing has changed in two millennia, and Mankind will always fail, unless… somebody cares enough to save us. –Alan Grant

From my own perspective, I was greatly impressed with it.  However, I am a comic book nerd who knows the gospel of Mark.  There have been other attempts to reimagine religious narratives in graphic novels and some have been more successful than others.  For example Deepak Chopra and Shekar Kapur’s Ramayan is an artistic delight and authentically manga experience.  However, the Bible is usually given the well meaning but saccarine 60’s pastel shades of the ghost of sunday school past.  Even the artistic talents who worked on Judge Dredd seemed heavily influenced by the images of their childhood.  Marked however has no such hangups.  This really does look like it belongs up there with Judge Dredd.  The art work is really good.  Mark’s Gospel has been placed into a futuristic post apocalyptic setting that intrigues the reader to carry on.

I have only a couple of concerns.  What is it for?  It doesn’t follow a true enough course to the Gospel itself although it does make you want to ask more questions.  Is this a springboard into the text for someone who has never really encountered the biblical narrative or is it a thought provoking encounter for people like me who have a good knowledge of the original?  Is it both and at the same time actually neither?